The traditional linear textile business model (from virgin materials to products and then waste), results in high consumption of raw materials and generation of waste, which contributes significantly to the large and negative environmental impact of the global textile industry. 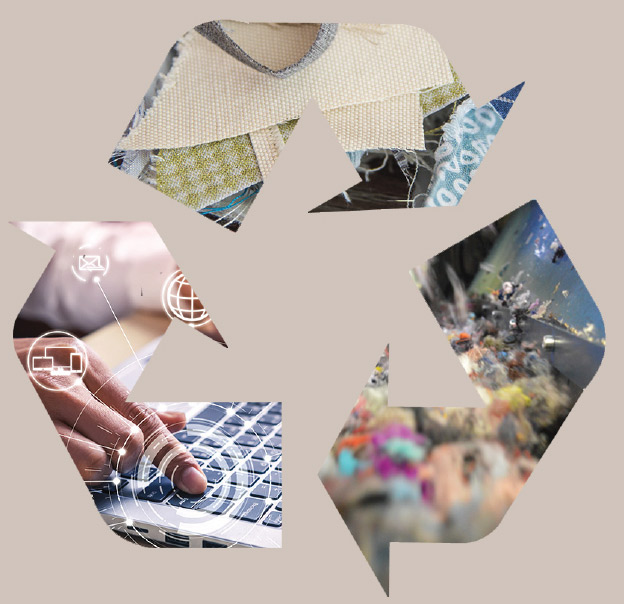 While apparel is only one of several textiles’ applications, the global apparel production and consumption appear to have doubled over the past 15 years, generating higher waste.
Even if the amount of textile waste separately collected in Europe has increased over the last five years from an estimated 2 mln tons in 2014 to 2.8 mln tons in 2019, this volume is expected to increase substantially once the EU waste legislation will be put into practice by the end of 2024 (as consequence of the EU Directive on Waste EU 2018/851).

In less than four years textile waste shall be collected separately and could total an amount between 4.2 to 5.5 mln tons3 which should be dealt with ideally within the EU4.

For non-collected textile waste, currently there are neither viable re-use solutions, nor alternatives to incineration or landfill which is meant to be abandoned. There is simply no large-scale plan in Europe to manage all textile waste streams.

The European textile industry is renowned for its high-quality products and a front runner in the shift to circularity. Companies have already been investing and introduced circularity in both production and products. However, most of the solutions already on the market or at R&D stage, represent small portions of their business models. Companies face financial & technological barriers which they cannot address alone and therefore need collaboration across value chains.

In line with the EU ambitions of the Green Deal and the transition into Circular Economy, collaboration can turn a societal waste problem into a business opportunity for European SMEs and large business alike, as well as a new source of job creation in Europe.

Therefore, EURATEX, the European Apparel and Textile Confederation, proposes the development and set up of European Textile Recycling Hubs (ReHubs).

The increase of collected textile waste from 2.8 mln tons to 4.2 - 5.5 mln tons will become a major environmental and economic challenge, unless Europe sets up a large scale and coordinated system for collecting, sorting and recycling all textile waste streams by 2024. In less than four years, the textile wastes shall be collected separately and should ideally be processed in the EU. To turn the upcoming textile waste problem into an opportunity, EURATEX, the European Apparel and Textile Confederation, with its members, launches a join initiative to set European Textile Recycling Hubs, the ReHubs.

Setting the ReHubs near European textile and apparel districts will offer the benefit of circular economy by upcycling textile wastes, as a completely new, coordinated, large-scale management of material-streams.

The Hubs’ capacity to treat large volumes will create economies of scale, justifying the costs of existing recycling technologies as well as investments into new ones, such as chemical & thermal/melt recycling. This will generate new raw materials for the textile value chains, which is mostly made of SMEs (fiber-to-fiber closed loop), and for symbiosis with other European industries (e.g. automotive or other industries).

The ReHubs will enable the creation of a new European market of secondary raw materials saving additional waste-related costs. They will create and spread knowledge on products’ recyclability and product design for a better cooperation between makers and buyers across the industry value chain.

In a longer run and by successfully overcoming the R&D challenges, the ReHubs will not only tackle the issue of landfill and incineration, but they will build an opportunity for Europe to strengthen its autonomy for raw materials and provide a healthy recycling ecosystem across Europe. The ReHubs will create new green jobs. Estimates indicate that around 20 jobs could be created for every 1000 tons of textiles collected, sorted and recycled, ultimately creating up to 120.000 jobs in the European Union.

In the strategic textile ecosystem, the ReHubs offer a concrete example of partnership for change necessary to accomplish the EU objectives set in the Green Deal and in the Circular Economy Action Plan, as well as in EURATEX strategy.

5 Essentials for Your High-end Fashion Boutique